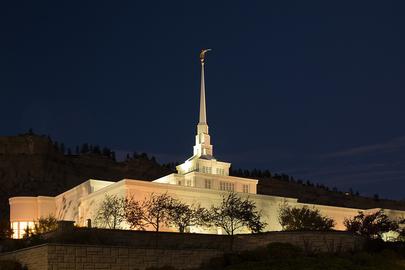 Treasure State Acres sits just north of Helena, Montana's city limits -- and just off Montana Avenue -- and is home to about 350 residences. It is a quiet neighborhood, yet close to Helena's fastest-growing commercial district, which includes Macy's, Target, Super 1, Albertson's, Lowe's, Home Depot and many other retail outlets.

TSA boasts its own sewer and water district, as well as a large park that includes a children's playground.

At Christmas-time, visitors from around the region drive through Treasure State Acres to see the spectacular Christmas lights with which residents have bedecked their homes, and the luminaries they have set along the streets. Another big attraction on Christmas Eve is the Nativity display with live animals at the LDS Church located near the entrance to TSA. People who come to see the display donate thousands of pounds of food to the local food bank. 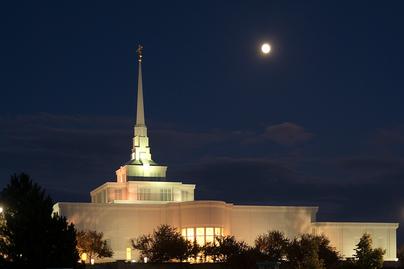 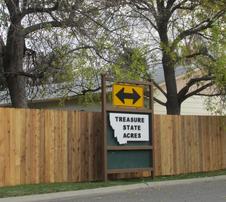 A REPORT ON THE LDS TEMPLE PLAN & SUMMER STREET WORK

​Wanted to let you know that LDS officials plan to demolish the existing church on Otter Road starting the week of May 24 to clear the site for construction for a new LDS temple, according to Johnny Watson, a Rexburg, Idaho, architect who is in charge of the project.

Watson told me earlier today that he’s filed a notification of demolition with the state but there’s a 10-day period before work can begin on tearing down the current church, or what LDS members call a meetinghouse.

There could, however, be an impediment to the LDS plans. Church officials want to hook the new temple up to TSA’s sewer system, but managers of the system have been reluctant to let new users come on to the system in recent years, saying it is at capacity now.

Watson said LDS planners have been busy coming up with estimates for TSA sewer system officials of how much sewage the new temple would generate. He argues that the temple, which will have just two meeting rooms, each with a capacity for only 40 people, would generate less sewage than the average single family house.

Robert Much, who manages the TSA sewer system, said he and other sewer system officials have been reviewing the LDS estimates and other relevant material. He said the board will meet June 3 to discuss what to do. He noted that several members are opposed as the system is at capacity, He also noted that several years ago the system had to get permission from the state for a special discharge when a lagoon got too full one winter.  Much said the board has turned down several past requests from property owners who wanted to be added to the system because it is at capacity.

As for moving ahead without sewer system approval, Watson said: “We may have to proceed at our own risk.”

(UPDATE: Watson has since told me that LDS officials have decided to postpone a decision on demolition of the meetinghouse until after they meet with the sewer board on June 3.)

Watson also answered a number of other questions about the project in a conversation and email exchanges. Many of the questions were submitted by TSA residents.

While the new temple would be roughly half the size of the current meetinghouse, it would be more ornate with a stone façade and a steeple rising 75 feet in the air. The temple and spire would be lit at night. The lights would not shine towards any neighboring properties but only at the temple, and neighbors won’t be able to actually see any bulbs. Watson said he doesn’t believe the light reflected off the light gray stone of the temple should be too bright. He provided two photos of the Billings’ temple at night to give an idea of what it looks like, and here they are:

I told Mr. Watson that it looked to me from the photos as though the Billings’ temple may not be as close to homes as the Helena temple would be, and that my sense was that TSA residents were concerned about light from the temple infusing their homes all night long. He responded: “I definitely understand the concern about lighting at night.  I will talk to the lighting designer and see what the capabilities of the lighting system are.”

Watson also acknowledged that the temple, combined with the meeting house, will draw more traffic to TSA. But he said he doesn’t expect the temple to create a lot of congestion. That’s because it won’t be hosting things like conventions. Also, the temple would host religious ceremonies like weddings and baptisms – events that likely would not take place at the same time as events at the meetinghouse. He said the parking lots that will be constructed should be enough to accommodate any crowds at either the temple or the meetinghouse.

AN UPDATE ON SUMMER ROAD WORK

We sought bids for work on TSA streets and Cap Paving was low bidder. Cap will do a 1.5 inch overlay on Beaverhead, as well as Kodiak and Cayuse from Bobcat to Wolverine. It is possible the Kodiak and Cayuse work could be delayed or moved around if the church project is going hot and heavy this summer and heavy equipment is using those streets.

The overlay projects will most likely occur in early July, and residents on those streets will need to move vehicles, RVs, boats and so on when work is being done.

The county has scheduled for later this month (May) the patching of holes and sealing of cracks in all of the subdivision’s other streets -- a project that will cost about $18K. Again, we ask that you remove vehicles, RVs, etc. from the streets when the work is being done. We’ll try to give everyone a few day’s notice as we get closer to that work.

These projects will cost our RID fund about $96K. The fund currently has about $286K.

We may also put a gutter at the Wolverine/Cayuse intersection so that water that often ponds up at the plugged drain there during storms will instead run down Cayuse as it should. A crew just put a new gutter in on Kodiak near the new drain installed on Kodiak last year across from the LDS Church. That was part of the project to replace a plugged drain pipe.

We should have adequate funds for our long-running plan to make improvements to many of our French drains. As many of you know, that plan has been slated for years, but the engineering firm in charge has kept putting it on the back burner. So we are working with the county to get a new firm that can take over. Since all the planning/testing has been done, we hope a new firm can hit the ground running and still get the project done this year.

The plan, basically, is to add extensions to a number of our drains, most of them along Red Fox, which have had the biggest problems in absorbing runoff in storm situations. The project has been estimated to cost $75K to $90K in the past. On the top right of our "reports and documents' page, we have posted a link to the pdf copy of the engineering report that shows what the expansions look like and where the work will be done.

As most of you know, when we get storms, that water runs from south to the northeast in our subdivision. The drain expansion project is part of the effort to deal with that runoff and protect our streets. Unfortunately, a lot of that water has ended up on the north end of Cougar, where some homeowners have seen their yards, garages and so on flooded.

In the past year or two we’ve cleaned out some drainage pipes in that area in order to get the water out more efficiently from Cougar to the interstate right-of-way. And we’ve got other plans for the future we hope will improve things even more.

Getting water to run more efficiently doesn’t just protect people’s property, but it also helps protect our streets. One reason we’ve held off a bit on some street maintenance is that we wanted to get a better handle on the water situation before we put a lot of money into rebuilding streets.

In terms of deciding what street work we’ll do (such as the work on Cayuse, Kodiak and Beaverhead) we’ve generally relied on assessments done by engineers several years ago as well as more up-to-date assessments done in consultation with county officials. We also moved up the Beaverhead project because of the availability of the exaction funds.

In terms of future work, the next two biggest priorities are likely Bobcat and Buffalo. We don’t quite have the funds now to do overlays of those streets but should have in the next two or three years.

Send a check for $25 (made out to TSA Homeowners Association) to Terry Atwood, 4230 Wolverine, Helena, MT 59602. Also, if you know someone who would want to get on TSA’s email list, have them contact me at sshirleymt@gmail.com​

If you have a question on a TSA matter, have a suggestion for this web site, or want to get on our email list, let us know at: sshirleymt@gmail.com.

Treasure State Acres is home to one of Helena's two major chapels under the Church of Jesus Christ of Latter-Day Saints.

TSA's park is one of the largest and most used in the county.